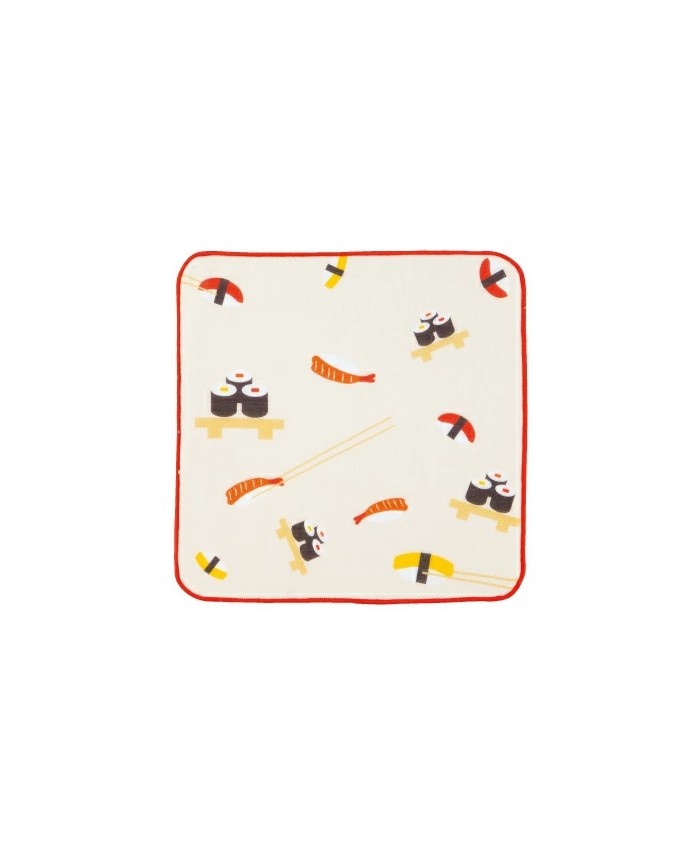 This towel is a small hand towel decorated with typical Japanese motifs.

You can enjoy the soft touch of the gauze and the soft absorbent fleece at the same time.

This towel is a perfect gift for your travels for your friends.

by subscribing to the Newsletter

(30 days for products arriving from Japan)

What is a Towel handkerchief ...?

In Japan, the Towel handkerchief, or fleece wipes, can be used to dry your hands and sweat when you go out, but it can also be used as a cover for plastic bottles to prevent them from getting wet.

Towel handkerchief are generally around 15-35cm x 15-35cm and are thicker than regular cotton handkerchiefs.

They are a little smaller so as not to be too bulky to fold and carry around, but the towels absorb water very well and are very functional even at this size.

There are many types of sushi, such as nigiri-zushi, cirashi-zushi and temaki-zushi.

In the past, sushi was a special dish for festive occasions, but many restaurants in Kaiten zushi have sprung up, with good prices, it has become more everyday. In recent years, sushi has become known around the world as a typical Japanese dish.

In the 1980s sushi bars appeared all over the United States and sushi has since spread all over the world, including California Maki wrapped with avocado and crab for those who don't like to eat raw seafood.

Nigiri-zushi is said to have originated in the late Edo period (around the beginning of the 19th century). At the time, yatai (stalls) were all the rage in Edo (now Tokyo) and this is where nigiri-zushi first appeared.

At that time, nigiri-zushi was said to be about the size of a tennis ball which was much larger than it is now. Later, after the Great Kanto Earthquake of 1923, Tokyo sushi chefs returned to their hometowns and nigiri-zushi spread throughout Japan.

There are many technical terms used to describe sushi.

16 other products in the same category:

Are you sure that you want to report this comment?

Your report has been submitted and will be considered by a moderator.

error Your report cannot be sent

Your comment has been submitted and will be available once approved by a moderator.

error Your review cannot be sent